Faithful to the Bay with 49ers & Adobe

Home > Design > Faithful to the Bay with 49ers & Adobe

Faithful to the Bay with 49ers & Adobe 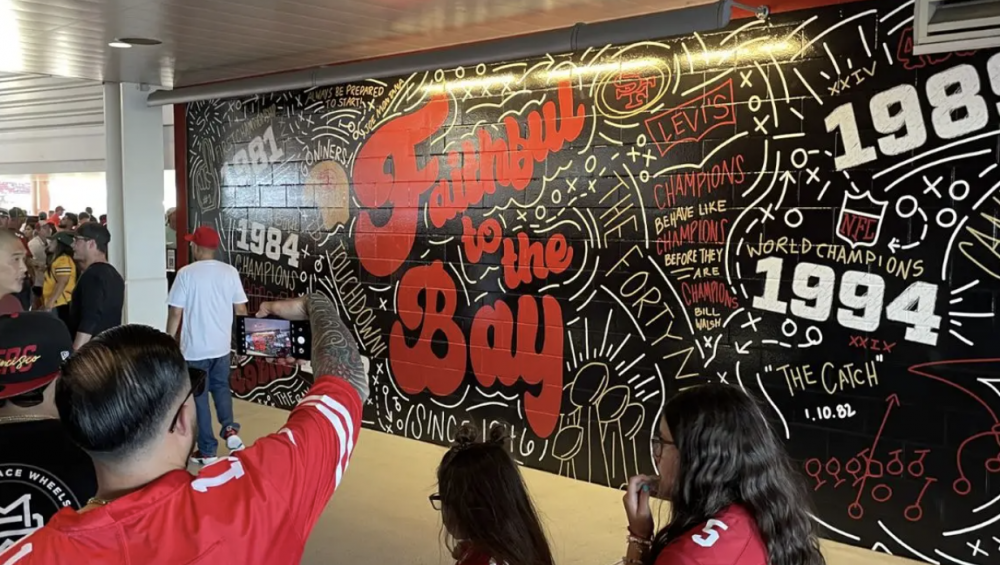 ADOBE EXPRESS + BRIDGEGOOD | Show you are ‘faithful’ to the San Francisco 49ers and win.

To be a loyal sports fan is to be faithful to your chosen team. In the Bay Area, legions of fans have been just that to the San Francisco 49ers for over 75 seasons. In the early 1980’s Joe Montana joined the team — a winning record began, and the term “49er faithful” was coined.

The “Faithful” fans have roots with the 49ers not just at Levi’s® Stadium, but also at the famed Candlestick Park and even Kezar Stadium.

Faithful to the Bay

To pay homage to The Faithful, Adobe and the San Francisco 49ers worked together on two fan-designed murals that now reside inside Levi Stadium. The murals were a collaboration between the 49ers creative team, Adobe Studio and BRIDGEGOOD — to build upon the shared vision that creativity can, and is positively changing the world.

“Through this experience, I learned that design isn’t always about how something works, it’s about the values of how something is created.”

BRIDGEGOOD is a nonprofit organization that prepares job seekers—predominantly Black, Indigenous, women and people of color —in the digital design field by inspiring first-generation college students to become creators, leaders in their communities, and designers of social good through exposure to STEAM (Science, Technology, Engineering, Art, Math).

“Just like Adobe, BRIDGEGOOD believes in the ethos, creativity for all. Through the 49ers partnership led by Adobe, we are proud to amplify the voices of our local designers.”

“Adobe is proud of our new creativity partnership with the San Francisco 49ers. We are helping The Faithful express their fandom in new, and creative ways,” said Meredith Batcheller, Head of Sports Marketing at Adobe. “Fans can celebrate their team and history with designs by our fantastic BRIDGEGOOD partners, and they can remix exclusive templates on Adobe Express and share their Faithful spirit with their own communities.”

Show your 49ers Faithful spirit with Adobe Express and win

Remix customizable Adobe Express San Francisco 49ers templates in your own style and share on Instagram or Twitter with #adobe49ersfaithful for a chance to win a pair of tickets to a game this 2022 season, as well as a merchandising package full of all the best team swag. To make creating even easier, Adobe Express has customizable templates to unlock your creativity, and celebrate being a part of the faithful 49ers fanbase.